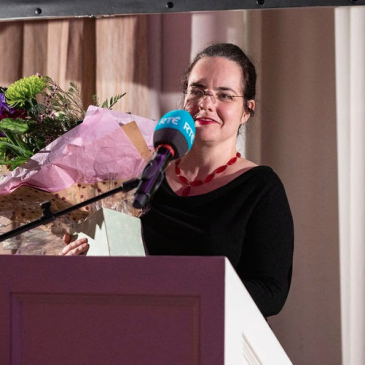 Flowers for Gabriela Hermer, on stage at the IFC in Cork.
Five years long she was the very dedicated chairwoman of the Ake Blomström Award.
Intense applause everywhere!

Gabriela will now be a coach for one of the new AB winners, as will do Simon Elmes and Conor Garrett. Edwin Brys will continue to coordinate the AB Training.
And now a warm welcome to the new chairman, Tim Desmond from RTE!